Campji: Campji is the name of Shatila’s first journalistic media platform set up and run entirely by young people in the community. It was set up in 2016 through a project which provided a team of aspiring journalists with professional-level training on journalistic photography, production and video recording, among others. This innovative program was initiated in partnership with Deutsche Welle Akademie, which ensured the quality of the training provided, and followed up with the young journalists throughout the year. In November, following the training course, the team officially launched their new platform, which they named Campji, a mix of Arabic and English which refers to the hub of the platform being located within the camp itself. The training continued throughout 2017, further developing the Campji team’s skills. They continued to cover stories and report from Shatila, they also visited other Camps in Lebanon. By the end of 2017, Campji became independent from Basmeh & Zeitooneh. This step comes as part of our commitment to empower the communities we work with and ensure the sustainability of projects. Mobile Journalism: In March 2017, Basmeh & Zeitooneh with DW, initiated another program - Mobile Journalism. The participants are trained on different media topics and skills including Mobile Photography, Social Media, Photo Story, Creative Writing for journalism, Filming and Editing. The training equips individuals with the skills required to be mobile reporters, thus also providing them with potential employment opportunities in the future. It also provides participants with better knowledge and tools to express their opinions, experiences, and dreams. In 2018, the Media Training Center is looking to expand to Tripoli and Burj el Barajneh. 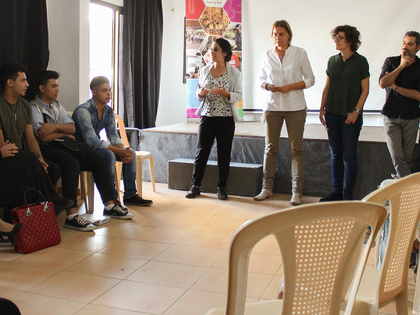