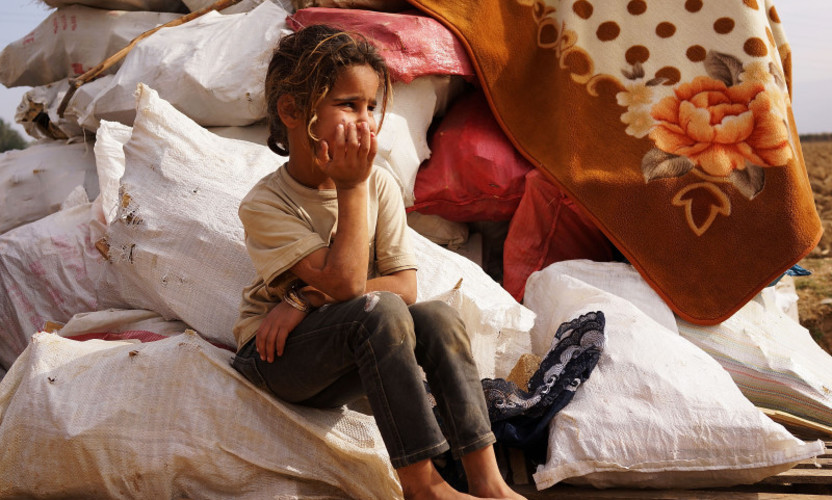 BEIRUT — Fadi Hallisso and his colleagues have taken on a nearly impossible task. In the fifth year of the war that is ravaging his homeland, Syria, his small team is cobbling together programs to help fellow refugees who have been left homeless and stateless by the conflict.

But the very same grassroots style that has made Hallisso’s group, Basmeh & Zeitooneh, an icon among humanitarians has also exacerbated its funding difficulties. Most of the grants that Basmeh & Zeitooneh won from international funders in the first years of the crisis have run out, leaving it with the ability to cover only about a third of its budget.

“Compassion and the sense of emergency faded about a year ago,” Hallisso said. “We’re trying to prepare people to rebuild Syria in the future. But we don’t know what we’ll be able to continue doing next month.”

Money problems are now afflicting every organization trying to help Syrians. Interest in the grinding conflict has flagged; sporadic political attention and media coverage mostly focus on the Islamic State, while fewer and fewer governments respond to the United Nations’ “urgent appeals” for aid. According to the latest U.N. figures, only about one-fourth of the needed money for Syria has been pledged this year.

For a sense of what that looks like at the street level, there’s no better place to look than Basmeh & Zeitooneh, which Hallisso and a group of friends established in 2012. The group has done everything right — rising out of the community it serves, responding quickly to new local needs, delivering help with minimum funds wasted on costly overhead — yet it faces a worse funding shortfall than its bigger, more lumbering counterparts.

As a result, it has been forced to shutter successful initiatives. This spring, it had to close five programs, including a vocational training initiative that had established several refugee women as small-business owners. Its school only has a month’s funding left, and it has had to stop paying some of its 100-plus staff members, almost all of whom are refugees themselves.

Even international funding for strictly emergency aid, such as food, has completely dried up.

“If a hungry man shows up at our center, we can’t tell him, ‘We can’t give you food, but you are welcome to come to our arts and culture center,’” Hallisso said.

These struggles are par for the course for the overall aid effort. The numbers are staggering: 4 million Syrians have left the country, and another 7.6 million are internally displaced. Tens of thousands have been newly displaced from their homes in fighting in the month of June. According to UNOCHA, the U.N. agency that tracks the overall effort to respond to Syrian needs, there’s a $5.6 billion funding shortfall this year.

Basmeh & Zeitooneh’s story parallels the rise and fall of interest in Syria’s plight. In the fall of 2012, Hallisso and his group of friends collected $15,000 from private donors, mostly wealthy Syrians, and used it to bring winter gear to freezing refugees. In the process of responding to requests for help, they discovered that many of the needs of the refugee population were being unmet. In response, they decided to launch Basmeh & Zeitooneh in the Palestinian camp of Shatila, a ramshackle neighborhood in south Beirut that has long been a bastion of official neglect.

Hallisso, 37, began his professional life at an Internet company, and was also the steward of his family’s engineering business in Aleppo. The work, however, left him with “an emptiness, a lack of meaning,” he said. He found more fulfillment running youth scouting programs, and eventually he quit a lucrative business career to enter the Jesuit priesthood.

He changed course once again in 2011, after Syrians rose up peacefully against the regime of President Bashar al-Assad. “I felt my prayers had been answered. People were fighting for their dignity,” he said. “The first months we were drunk with joy.”

Most international humanitarian groups don’t set foot in Shatila, where Basmeh & Zeitooneh established its base, because doing so is considered a security risk. There were no international groups working with the new Syrian arrivals in the camp or with the long-standing Palestinian population. But Basmeh & Zeitooneh dove right in, opening a community center on an upper floor of a narrow apartment building.

The approach was simple and small in scale. It started with a few programs, such as emergency resettlement aid, rent subsidies, women’s workshops, and lessons for children, delivering everything out of a single space that was located in the middle of the neighborhood where the refugees lived. The founders had noticed that other “women’s centers” set up by NGOs languished because they were hard to reach and because they weren’t child-friendly. So Basmeh & Zeitooneh laid out an intimate space where women could attend training while their kids played in the room next door, in the care of a trusted neighbor.

Moujfa al-Ali, 40, fled with her seven children to Beirut a year and a half ago from a small town outside Damascus. Her kids study in Basmeh & Zeitooneh’s school, while she went through a vocational training class and subsequently opened a clothing shop across the street from the NGO. For the first time in her life she has a job, and she’s now the family’s primary breadwinner.

She credits Basmeh & Zeitooneh for enabling her family to make progress amid the mayhem. “The war happened, and we must overcome obstacles,” she said. “We have accomplished something that we must not lose.”

Basmeh & Zeitooneh grew quickly. Individuals gave it cash donations, and then bigger NGOs and donors, like the U.S. Office of Transition Initiatives, directed more than $1 million in grants to the group. It opened community centers in Tripoli, the Bekaa Valley, and another Palestinian refugee camp in Beirut.

But the organization quickly found itself hemmed in. Major donors don’t give grants to local groups, preferring to work with major nonprofits that run massive multicountry programs. When Basmeh & Zeitooneh staffers approached the United Nations for grants, they were told to pitch projects bigger than $5 million. If they proposed a $5 million project, Hallisso said, they were told they didn’t have the capacity.

Bigger aid groups prefer to do projects themselves, Hallisso said, resorting to partnerships with local groups like Basmeh & Zeitooneh only when their more expensive, often foreign, employees can’t get access to “beneficiaries.”

“In Tripoli, they only started looking for local partners when their employees started getting kidnapped [in northern Syria],” Hallisso said. “This is insulting. This talk about building local Syrian capacity is BS. We are only there to take the risks for you.”

An emergency without visible end might still be an emergency, but Syria’s crisis has passed the point where the world is able to respond to it in crisis mode. In June, Basmeh & Zeitooneh won an unexpected reprieve with a 350,000-euro grant from Irish Aid. It has also started an online campaign on the regional fundraising platform Zoomaal. But the larger concerns about funding remain.

“It’s inevitable after four years that it’s hard for people to remain engaged in the massive need and the crisis,” said James Sadri, who heads The Syria Campaign, an effort to refocus Western interest on the crisis.

Sadri’s organization represents 300 organizations that work inside Syria or with Syrian refugees. The campaign’s goal is to mobilize Western public interest around action items that arise from a Syrian agenda, like expanding the amount of aid or ending barrel bombing. People can still have impact, Sadri said, by supporting the hundreds of individual groups working at great risk on the ground in Syria or by pressuring Western governments to shift policy. Yet it’s difficult, he said, to convince people that anything they do as individuals can make a difference or that there is a way forward in a complicated conflict like Syria’s with messy, violent politics.

For now, Basmeh & Zeitooneh is — like the Syrians it serves — simply trying to survive. As Lebanon has tightened restrictions on Syrians and on NGOs, Hallisso’s colleagues have opened an office in the southern Turkish city of Gaziantep. The top managers work for a fraction of the salaries they’ve been offered at other NGOs. When they travel outside Lebanon, they’re never sure whether they’ll be allowed back in — just one of the many pitfalls of having refugees run a refugee aid organization.

Whether operating on generous donations or on a shoestring budget, Hallisso and his colleagues plan to continue their work.

“Abandonment and despair are dangerous,” Hallisso said. “When you show people solidarity, it will give them hope.… We are building the daily capacity within our community. We cannot wait until the war ends to start.”