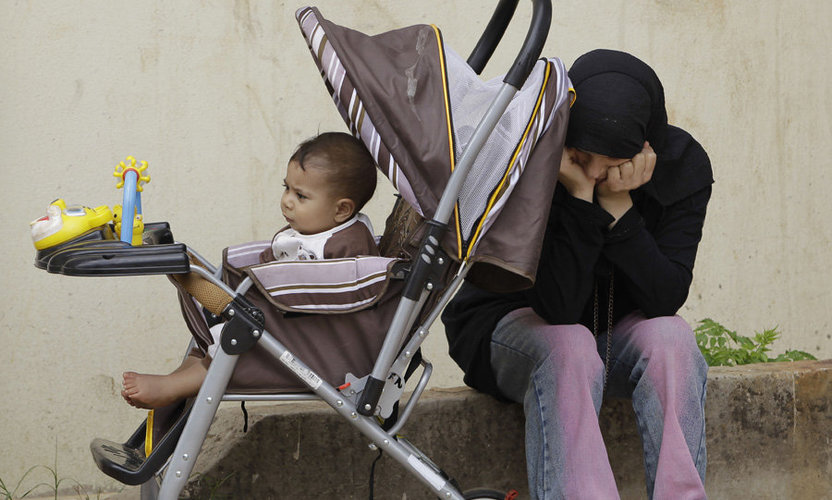 BEIRUT — Before Syria's civil war began, Rabaa Ahmed was a housewife in Damascus taking care of three children and occasionally helping out with her husband’s cleaning-products business. Now she is among more than 145,000 Syrian refugee women thrust into the traditionally male role as head of household, providing food, shelter, and security for their families.

“I feel like mother, father, sister, brother, everything [to my children],” Ms. Ahmed says.

The struggles these women face are outlined in a new report by the United Nations refugee agency based on interviews with 135 Syrian women displaced to Lebanon, Jordan, Iraq, and Egypt, where the report says they face hunger, harassment, and exploitation. One in four Syrian refugee households are headed by women, according to the report's estimates.

The conflict in Syria, now in its fourth year, has led 2.8 million Syrians to leave, mostly to neighboring countries in what aid agencies have called the worst refugee crisis in two decades. In Lebanon, a country of 4.5 million people, Syrian refugees are forecast to make up a third of the population by the end of 2014.

For some, like Ahmed, the displacement to Lebanon is an opportunity to take on new challenges. “Our hearts have become hard. In the beginning I was weak, but I had to push myself to be strong in front of my kids,” she says.

Together with her children, she fled Damascus during heavy shelling in 2012 two weeks after her husband went missing. After months staying with various relatives, she settled in the Palestinian camp of Shatila in the southern suburbs of Beirut, where her brother-in-law lives. A forthright woman wearing a leopard print headscarf, she talks openly about the difficulties she has faced since arriving in Lebanon.

Eight months ago Ahmed began coming to Basmeh and Zeitouneh, Arabic for “Smile and Olive,” a center for Syrian women refugees set up by Syrian expats. Now most days she joins a few dozen other woman in a small room at the center in Shatila, making embroidered garments that are sold mainly in the Gulf.

The community has been a lifeline for Ahmed. Before she came, she had been struggling with depression, finding it hard to cope in her new role as head of household.

“The current crisis in Syria is affecting women and girls in different ways and everyone is starting to realize that, of course, it's going to have an impact on communities. Whether that's a positive or negative change, that's yet to be seen,” she says.

Ahmed says her brother-in-law wanted to control her comings-and-goings, and expressed horror at the impropriety of a single woman living without a man. But she insisted that she should be head of her own household. “I have to manage everything and there is someone – younger than me – controlling me?” she says, incredulously.

“For most of the women here … this is the first time they are bringing money home,” says Fadi Hallisso, the general manager of Basmeh and Zeitouneh. “They have changed a lot. They feel they have a level of independence.”

Even for women with professional backgrounds, forging an independent path in Lebanon's refugee communities has its challenges.

Fatima Ayoub is a lawyer from the Syrian city of Qusair. Her husband was killed in 2011 by regime forces and she fled shortly after, settling in the east Lebanon region of Bekaa, where she is now responsible for her 9-year-old son, elderly mother, and her sister and brother, who has Down's Syndrome.

“I am used to working, but this is the first time I have all this responsibility and in a strange place,” she says. One of the hardest things was being unable to afford medication when her elderly father fell sick late last year. He died in February.

'All the men here are dirty'
Ms. Ayoub left the first job she found in Lebanon, at an antiques store, after she says the owner sexually harassed her.

“It is hard to be a single woman, especially in this society,” she says, adding that “all the men here are dirty.” She now works in a local pickle factory.

A year or so ago, she married her brother-in-law, keen for protection and support. When he didn't contribute to the household bills she says, she decided going it alone would be the better option, and they are now married “only in name.”

These women experience the dual pressure of needing to work to support their families, while knowing that being alone puts them at risk. Ahmed says she would encourage her 13-year-old daughter, Sara, to work in the future. “But not in Lebanon.”

“It is not a good place to work, especially for girls,” she says. “I never let her Sara out alone. People see Syrian women as easy targets."