Has Hospitality Turned to “Hostipitality” for Syrian Refugees in Lebanon? 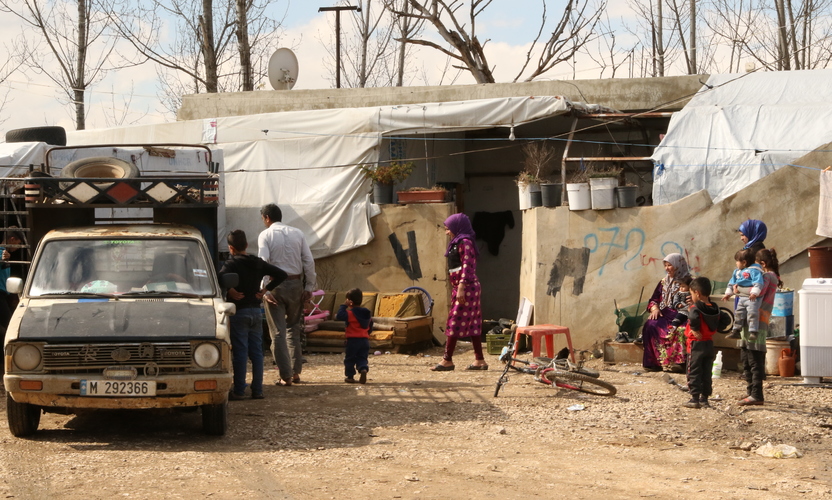 The curtain opens on a makeshift classroom somewhere in Lebanon. Chalked on a blackboard: “We sing the chorus together.” Teacher enters stage right. She calls one of the Syrian pupils to the front and asks him to read. Although he pronounces the words fluently, the teacher criticizes him harshly. When he asks, “Who is we?” she shouts: “Idiot, sit down!” Next, she turns to one of the Lebanese students and asks him to read the same text. The boy can hardly stumble through the first word. “Bravo!” she exclaims. “Why isn’t Sara in class?” the teacher asks. “She was married yesterday,” a girl volunteers. The teacher smirks in disgust and proceeds to attack the Syrian children one after the other for trivial offenses. A boy finally turns to the audience: “Why do the Lebanese hate us?”

On June 15, I attended a play called “Laysh hayk?” (Why are things like this?) — sponsored by Belgian NGO “SB OverSeas” — at the Metro Theater on downtown Beirut’s Hamra Street.

As I discovered later, many Syrian refugee kids who were enrolled in Lebanese schools have dropped out because they were unable to acclimate to a Lebanese curriculum that requires proficiency in English and French as well as Arabic. They felt stigmatized.

They put on this play created out of the many questions they had been posing to their teachers for months like: Why does Dad beat Mom and me? Why are girls married off when they’re only ten and eleven? Why are so many of us living in one room? Why are things like this?

According to a new report by Amnesty International, “despite the huge influx of refugees, the host countries have received almost no meaningful international support” and “calls by the UN for the international community to resettle refugees from Syria have largely fallen on deaf ears.”

The situation of Lebanon’s 1.2 million Syrian refugees (half of them children) is even worse than in Turkey and Jordan — the two other countries that, with Lebanon, now host almost a quarter of Syria’s population. In May, per the Amnesty report, the Lebanese authorities told UNHCR to suspend registration of Syrian refugee’s altogether.

Displaced Syrians today make up 20% of Lebanon’s total population, and they have outstayed their welcome. In some areas, banners warn Syrians that if they are found out in the streets after dark they will be arrested. Unable to find shelter in Lebanese areas, many have fled to camps that were set up in 1948 to house Palestinians fleeing from the new state of Israel — camps that the UN relief agency for Palestinian refugees (UNRWA) had built in the region as a temporary measure continue perforce to function today. Palestinians born in these states of exception have had no option but to remain there where they await a seemingly impossible solution to the Israeli-Palestinian conflict.

During the past 67 years, the Shatila camp like other Palestinian camps has grown to accommodate new generations, and now Syrian refugees. Vertically. The borders of the 1.3 square kilometer camp cannot change and so the only option is to sprawl upward. New floors are added to already unstable structures. Outdoor stairwells crumble under the constant stream of new feet. Sewage flows through back alleys. Seawater is the only available water out of the taps. Garbage piles high at street corners. And spaghetti-tangled electric wires hang dangerously low. Despite their destitution, many Palestinians in the camps have opened their modest homes to the newer refugees.

A number of local and international NGOs work with the Syrian refugees, but resources are scarce and there is donor fatigue.

In search of answers to the child actors’ questions, I climb up the five flights to the top floor of the “Basmeh and Zeitooneh” center — Arabic for “smile” and “olive” (a symbol of peace and nourishment). This Shatila-based NGO was founded in 2012, as a response to the Syrian crisis, by Lebanese and Syrian friends — some of whom were refugees. Attempting to provide vital services to more than 15,000 individuals with minimal local and international support, the project managers are aware of how little they can do, but they persist. Their motto: “Better to light a candle than to curse the darkness” — a phrase first uttered in public in 1961 by the founder of Amnesty International Peter Benenson, and popularized by John F. Kennedy.

A year ago, the center opened a school that now educates 400 mostly Syrian children in their very tight quarters in the heart of the camp. It is the only school for Syrian refugees at Shatila.

From 8 till 1:30, Syrian university graduates and some Lebanese and Palestinian instructors teach six to fourteen year-olds a curriculum derived from the official Lebanese curriculum and adapted to the needs of the Syrian children. The school is not officially acknowledged by the Lebanese Ministry of Education.

While other NGOs, including SB Overseas, also provide this non-formal education to the refugees (outside the camp), and Lebanese public schools currently educate around 100,000 Syrian refugees , there are nearly 350,000 Syrian refugee children who don’t have access to education at all, says Basmeh and Zeitooneh programs manager Maria Minkara. (The Lebanese government, she said, is working closely with the UN to find additional pathways to enroll all of the Syrian children in schools by 2016.)

I met a mother of one of the actors from the “Laysh hayk” play in the women’s craft center, a floor above the school. Had she liked the play? Yes, very much. It was her first time in a theater. When had she come to Beirut? Two years ago when the regime bombarded Aleppo and the countryside where they lived. Her daughter — she played the old lady with the stick — is still terrorized. But she loved being in the play.

No, the questions were not too tough. These early marriages are a terrible problem, but what choice do the parents have? They cannot afford to feed all their children and so they pass on the responsibility for the girls’ sustenance and protection from sexual violence to a man, however old, who might be able to care for them better than they could. Beating? What do you expect of a man who has lost his job and his dignity because he can no longer support his family? He is constantly fearful and angry. Hadn’t I seen the unbearable conditions in which they lived?

The specter of what happened in the Palestinian camp of Yarmuk in Damascus last April, when Islamic State militants had invaded the camp and driven families out by the hundreds, hangs over them. Threatening. Even if it is not IS that drives them out, the Lebanese might. As it often does, hospitality has turned into hostility, or what the French philosopher Jacques Derrida has called “hostipitality.”

Basmeh and Zeitooneh For Relief and Development is a grassroots Lebanese NGO founded in 2012 as an association by Lebanese and Syrian friends — some of whom were refugees — as a response to the Syrian crisis. The community center in Shatila serves as a reference point for Syrian refugees to seek direct assistance and information and learn income-generating skills, and it also hosts a medical clinic (in partnership with Médecins Sans Frontières) that provides free services to pregnant women, children under 15 years-old, and people with chronic diseases. The organization serves 3700 families in Beirut and its suburbs and 780 in the Bekaa Valley, and employs more than one hundred mostly Syrian full-time staff members. The NGO has also opened community centers in Burj Al Barajneh, Tripoli, and the Bekaa Valley, with another underway in Gaziantep, Turkey. Funding reductions have put five out of their ten projects in Shatila at risk, namely the Small Grants Program, Vocational Training Institute, Peace Education, Protection and Psychosocial Support, and the Arts and Cultural Center. To learn more about their programs see the NGO’s web page. Follow on Facebook and learn more about their efforts on Twitter at @basmehzeitooneh.

Miriam cooke was in Lebanon doing research on Syrian revolutionary cultural production. She was invited to visit the Basma wa Zaytuna Center at the Shatila refugee camp in Beirut by project manager Farah Azraq — the daughter of a prominent Syrian art benefactor whose “Art Residence Aley” project she is researching. cooke is Braxton Craven Distinguished Professor of Arab Cultures at Duke University and the author of several books, most recently “Tribal Modern: Branding New Nations in the Arab Gulf” (University of California Press, January 21, 2014). Other books include “Dissident Syria: Making Oppositional Arts Official” (Duke, 2007) and “Nazira Zeineddine: Biography of an Islamic Feminist Pioneer” (Oneworld, 2010). She is also a regular contributor to ISLAMiCommentary.