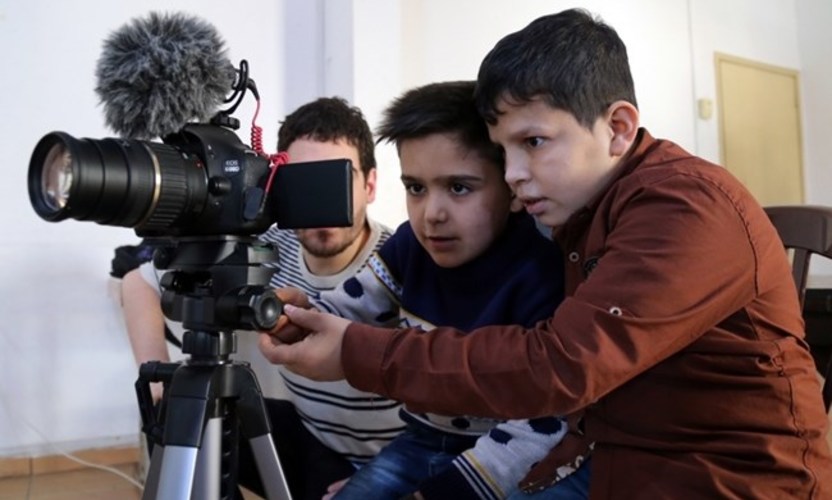 BEIRUT: Up onstage, above a crowded street in Shatila, a queen sits on a brown plastic chair, waiting for the witch to come.

The witch, a slender girl with a long braided plait, pauses then walks casually toward the queen. She commands the witch to fetch the fisherman who’d angled gold instead of fish and dared not give it to her.

“Try to be firmer,” Tatiana Renno, an organizer of this children’s film workshop, says encouragingly.

“You are the queen!”

The queen, Aleppo-born Maram, an 8-year-old with a charming smile, straightens up.

The children replay the scene. This time she speaks with more authority.

“That was great!” Renno smiles, giving Maram a high five.

“I like being the queen,” Maram tells The Daily Star, “because I have gold ... I can take control and nobody can say no to me.”

The Daily Star recently looked in on the third week of Basmeh & Zeitooneh’s four-week film workshop. In this session, the kids are for the first time rehearsing the script of the short film they’re going to shoot.

“In the first part of the workshop, there was a lot of educational content [like] watching and analyzing short movies,” workshop co-organizer Mohamed Khamkham says.

“We also played a lot of games to invent stories.”

Khamkham and Renno took the children’s stories and adapted them for the final script. Eleven-year-old Kamel is proud because he came up with the idea of the fisherman who finds the gold and the queen who demands it. He also likes the changes Renno and Khamkham made.

During the past weeks Kamel says he’s learned not to look into the camera and to behave naturally while acting. That wasn’t hard for him, he says, adding that he wants to become a professional actor and singer when he grows up.

Renno and Khamkham smile when they hear about Kamel’s plans.

“We’re getting really attached to the children.” Renno says.

“It’s really fun to work with [them]. They have a lot of energy and a lot of ideas.”

During the workshop, the children performed their scenarios then discussed how to perform and capture the film’s six scenes with Khamkham and Renno.

The kids are eager to get started.

“We can see that they actually love acting,” Renno says. “The first thing they say is, ‘Oh, can we act? We are going to play in front of you to make you guess what we’re playing!’”

Both Khamkham and Renno, who is Lebanese, grew up in France.

“Culture is not a luxury,” he says. “It has to be there for everybody.”

The center opened, Basmeh & Zeitooneh Communication Manager Sana Rady says, “because people and youth in Shatila need a place to express themselves in a good way.”

All the children in the film workshop are also enrolled in Basmeh & Zeitooneh’s learning center, an educational program fostering 1,300 children in Shatila and Bekaa.

Shatila seems a difficult place to grow up, but the stories imagined by the children in this workshop echo those of kids the world over, revolving around castles, kings and queens, school and friendship.

Kamel says his own role models are Alfredo and Romeo, the protagonists in the anime series “Romeo’s Blue Skies,” because they make a pact to stay friends forever.

He wants to remain with his best friends when he grows up, saying, “We’ll be like brothers!