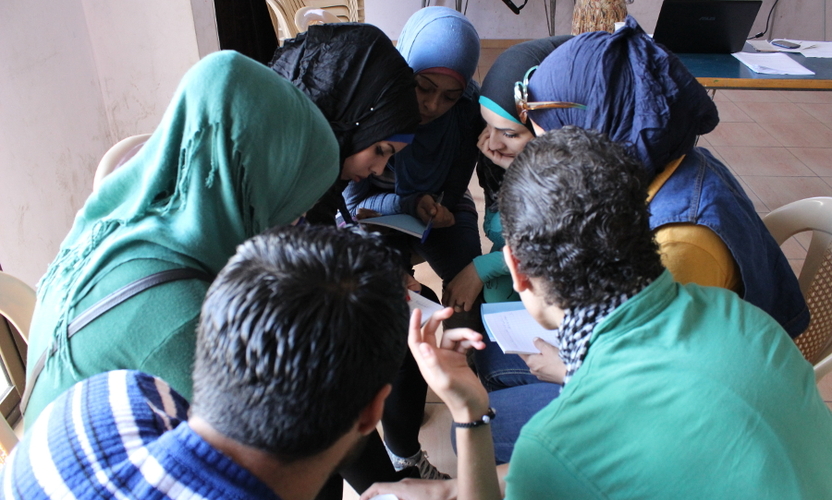 Meet the Lebanese organization that is providing Syrian women with training in embroidery and crochet workshops, allowing them to sell the products and earn livable wages.

Earlier this summer, UNHCR reported that more than 145,000 Syrian refugee families in Egypt, Lebanon, Iraq and Jordan, accounting for one in four households, are headed by women, a shift in power for a society traditionally dominated by men. Employment restrictions and limited resources in Syria's neighbors mean that many of these women, often newly single or on their own after their husbands have left or been killed in fighting, struggle to pay rent, care for their families in sub-standard living conditions and live under the threat of violence and exploitation.

Since May 2013, the Lebanese organization Basmeh and Zeitooneh has provided 70 women with training in embroidery and crochet workshops, allowing them to sell the products and earn livable wages. Based in Beirut, it has established three community centers in Lebanon's most densely populated refugee camps (Shatila, Burj al-Barajneh and Bar Elias), and manages an accelerated learning program in Shatila for 600 Syrian students ages six to 14.

Basmeh and Zeitooneh launched in May 2013, and was founded by five Syrian expatriates currently residing in Lebanon, whose goal was to motivate Syrian youth and women victimized by conflict. It began as a group of volunteers and transformed into a registered non-governmental organization.

Four months after the launch of Basmeh and Zeitooneh’s community center, it became the single largest project serving Syrian refugees in Shatila and its surroundings. Today, the organization serves an estimated 15,000 Syrians individuals in Beirut alone.

Shatila is a very dense camp. People in Shatila refugee camp live in homes without doors, windows, partitions and bathrooms. The government doesn’t provide any services to Shatila, so all the wires for electricity, pipes for water and plumbing are externally installed, and a lot of the time water and electricity run through the same wall.

There are electric wires everywhere so the children can’t play safely. We had at least one child hospitalized by electrocution. There is no place to be a child in a refugee camp.

Basmeh and Zeitooneh established a restoration campaign for 15 rented homes monthly. The program was launched in an effort to diffuse any existing tensions between the hosting community and the refugees.

Over the course of six months, we renovated 60 homes in Shatila. We installed glass window panels, rewired all of the electric networks and redid the plumbing systems, installed doors to give the refugees a sense of privacy.

As a result, the properties of Palestinian-Lebanese landlords have increased in value, so they have begun to see the presence of Syrians as a positive thing, not as a strain on their resources. And the Syrians now have better living conditions. We’ve also made sure to use local Lebanese products when renovating the homes.

I think both communities have realized that they share similar struggles, and can help each other out. Women are very neglected and domestic violence towards women and children also dramatically increases as a consequence of conflict. Many women feel depressed and isolated within their own communities.

We wanted to give women a space where they could share their stories, feel safe and productive, and give them the psycho-social support they need.

We established a women’s workshop in a community center in Shatila. We found trainers to teach embroidery and crochet to women with no prior work experience, and a minimal level of education. The idea was to give them the income-generating skills that would give them their own source of income in Lebanon and Syria if they were to return.

Most of the participants in the workshops have little to no education, are barely literate, confined to the house, and live under the control of a man. Some of them come from very conservative backgrounds and got married very young. Because of the conflict many of them are now the only breadwinners in the house, or some are widowed.

It took a lot of work to convince the men to let their wives leave the house and attend our programs, but it helped that we are located in the camp among the refugee population, so the women didn’t have to walk far to find us.

When they first came to us they were very shy and were worried they didn’t have talents and that no one would buy their products. But much to their surprise, people came to Shatila to buy their products, and this had a dramatic influence on their psychological well-being and confidence levels.

We now have 75 women in the workshop who are able to sell their products in Lebanon, Dubai and Qatar and make an income.

Our programs have not only given them confidence but have shaped the family dynamic; the women now feel like they have decision-making power. One woman said: "I come here to show the world that despite all our hardships, we can be productive, innovative and that we are talented women."

Empowerment of women takes place over time. The women gradually started to look at different ways to invest in themselves. For example, they now want to expand their knowledge and take literacy, English and computer classes through our vocational training institute.

We need to empower women economically so that they reinvest in productive means like human capital and education, and so that they can be a part of the future reconstruction of Syria.