Delight is a cricket pitch in Beirut’s Shatila refugee camp 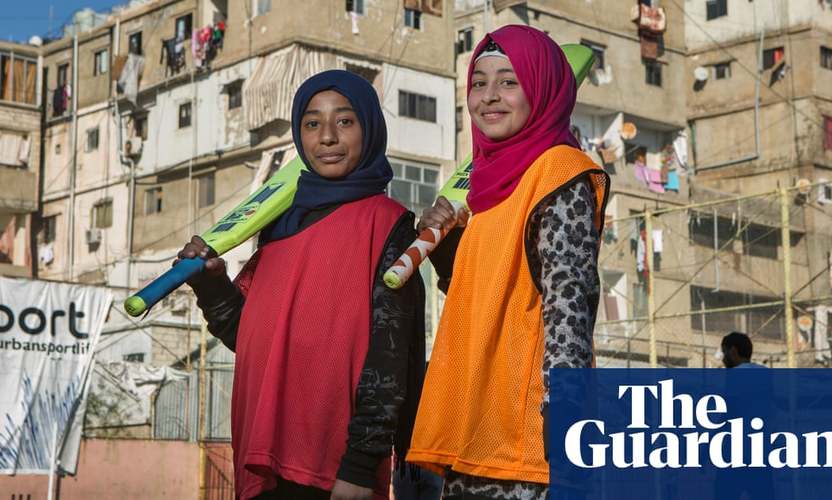 One of cricket’s most charming attributes is its habit of being played in the strangest places: mountain tops, short-lived sandbanks, the bottom of lakes, the South Pole. But perhaps no venue has ever been as improbable as this.

Across south Asia, cricket is played in slums and shanty towns all day every day but this was the Shatila refugee camp in Beirut. And the players were not weaned with a makeshift bat in their hand. These were Syrian refugees – aged between seven and 15 – who had never played cricket, watched cricket or heard the word cricket until six months ago, in some cases six days. Yet now, exiled in equally uncrickety Lebanon, they were spending a week immersed in cricket.

Shatila, set up as a temporary home for displaced Palestinians after the establishment of Israel 70 years ago, is hardly a camp any more. It is a teeming square-kilometre anthill of humanity with maybe 25,000 people – no one knows for sure. They live not in tents but in blocks of flats, built storey on storey as the population grew, like Lego but not as sturdy.

Here, generations have lived and died, often all too soon: through disease, the frequent accidents and two infamous massacres in the 1980s. Seven years ago the Syrians began to arrive, greeted with forced smiles by their exasperated Lebanese hosts and their entrenched Palestinian guests.

Conditions were bad enough already; for the Syrians they were infinitely worse, not least because there were nowhere near enough school places for their children.

These kids had managed to flee the war zone but now they had nowhere to run and barely anywhere even to stretch their legs. The fetid alleys are too narrow and too filled with vending carts, motor scooters and old bangers to allow even the most rudimentary ball game. And just above their heads, or sometimes lower, is a mishmash of pipes and cables, carrying water (salty, undrinkable) and electricity (erratic, from private generators), until a leak hits a naked power cable, which it often does. Two people died that way last month, I was told.

Different parts of Shatila are controlled by 10 different political factions and when they rub against each other, that can be fatal too. The place has elements of Gaza, Dhaka and the segregated streets of Belfast. But perhaps it is most like Dickensian London with modern technology.

Shatila is full of enterprise and vigour but it has no oases – save for two fake-grass football pitches, behind locked gates, the larger no bigger than two tennis courts. And it was here this week, to the bewilderment of the multitude, that the cricketers appeared bearing tennis balls and dozens of plastic bats and stumps.

To the 40-odd youngsters allowed in, it was wonderful simply to have the freedom of space. “They’re like horses being let in to a field,” says Richard Verity, the British management consultant in charge of the project. “They’re just dancing. It’s ages before they calm down.” But they also seemed to love being initiated into the mysteries of the sport. “They like cricket because it is so different,” said Mayzad, one of the local team working with Verity.

And at this level, cricket is a very inclusive game. You can’t bat? Well, maybe you can bowl or catch or throw. Headscarved girls are welcome here, in a society where they are often told it is unbecoming to run at all. And they all revel in it.

Verity has taken a year off from McKinsey, which is sponsoring the initiative, to run a local charity, Basmeh & Zeitooneh (smile and olive in Arabic). He brought in Shahidul Amin (known to everyone as “Ratan”), the chief executive of the London-based charity Capital Kids Cricket, to take charge of the coaching. Ratan and his team spent four mornings training potential coaches – as new to cricket as the kids.

Both adults and children understood the easy bits at once: hoicking the ball over Cow Corner, the joy of six, running in like the wind, hopelessly appealing for nonexistent run-outs, and arguing when the appeals were rejected.

The finer points – straight arms, straight bats, umpire’s decision final, ha! – may come later. “You have to listen to your coaches,” Ratan told the children sternly, though a twinkle is his more natural demeanour. “If the coaches tell you this is how you hold the bat, you do what they say!’” Even though the coaches did not know themselves a few days ago. And many of the kids still looked fragile: the undernourishment of war is not ideal for building athletes.

But come the tournament finale, some of them showed definite flair. There was 12-year-old Amina, a promising medium-pace bowler who burst into tears when her team lost; and Mohammad, 11, who took two excellent head-high catches followed by celebrations of Premier League exuberance; and cheeky-faced Mahmoud, 13, who I swear never stood still for a moment all week.

They all shared one attribute. “These children are very competitive,” said Thaer, one of the Lebanese coaches. “They have only really known the experience of war, so they play aggressively. Cricket is great for them.” Thaer teaches refugees in the Beqaa valley, where there about 350,000 Syrians, with more space than in Shatila but even fewer facilities. Most are in tents, surrounded by mud all winter except when the ground floods.
Advertisement

His school has 700 children, in two half-day shifts. 2,000 others had to be turned away. The playground is a small hall full of pillars. “We can teach a few football skills,” Thaer said, “but we can’t play a game. We can play Simon Says.”

Verity is hoping to expand his operation into the Beqaa Valley, and six potential coaches from there were supposed to be here this week. Three, all Syrians, turned back, fearful that their papers were not in order and that trouble would follow – a constant problem in a country where the welcome is wearing thin.

But this is a time for hopes and dreams. Shatila will now stage three coaching sessions a week. Ratan hopes a Syrian team will be able to attend a major primary schools festival he is running in London in July. “I have coached Test cricketers,” he said, “but this is more rewarding for me. Because of who they are and what they’ve been through.”

The dream? At one point Ratan held up a bright red cherry, the first real cricket ball any of the children had ever seen. “One or two years down the line,” he said.

Nothing is ridiculous. Less than 30 years ago the first Afghan refugees in Pakistan learned the rudiments. This summer Afghanistan will play in the World Cup as one of the world’s top 10 teams. No one can tell when, where, how or if the Shatila children will get satisfaction and stability in their lives but this week has given them joy and possibilities.

Matthew Engel went to Beirut as a guest of McKinsey & Co. justgiving.com/crowdfunding/let-the-children-play

We made a choice…

… and we want to tell you about it. We made a choice which means our journalism now reaches record numbers around the world and more than a million people have supported our reporting. We continue to face financial challenges but, unlike many news organisations, we have chosen not to put up a paywall. We want our journalism to remain accessible to all, regardless of where they live or what they can afford.

This is The Guardian’s model for open, independent journalism: available for everyone, funded by our readers. We depend on contributions from our readers. Will you support our choice?

Readers’ support powers our work, safeguarding our essential editorial independence. This means the responsibility of protecting independent journalism is shared, enabling us all to feel empowered to bring about real change in the world. Your support gives Guardian journalists the time, space and freedom to report with tenacity and rigour, to shed light where others won’t. It emboldens us to challenge authority and question the status quo. And by keeping all of our journalism free and open to all, we can foster inclusivity, diversity, make space for debate, inspire conversation – so more people have access to accurate information with integrity at its heart.

Guardian journalism is rooted in facts with a progressive perspective on the world. We are editorially independent, meaning we set our own agenda. Our journalism is free from commercial bias and not influenced by billionaire owners, politicians or shareholders. No one steers our opinion. At a time when there are so few sources of information you can really trust, this is vital as it enables us to give a voice to those less heard, challenge the powerful and hold them to account. Your support means we can keep investigating and exploring the critical issues of our time.

Our model allows people to support us in a way that works for them. Every time a reader like you makes a contribution to The Guardian, no matter how big or small, it goes directly into funding our journalism. But we need to build on this support for the years ahead.