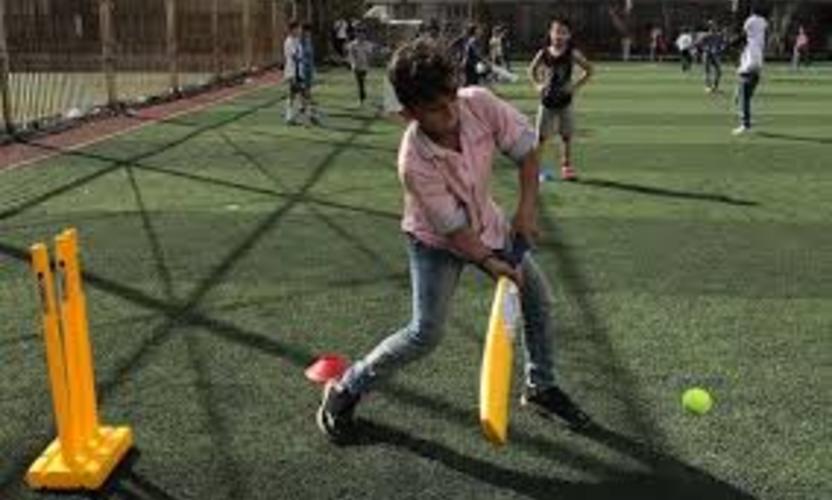 Beirut last Monday morning was rainy and chilly as Mount Lebanon was snow-capped. Outside a hotel in the city centre which has been re-built since the civil war with much of the old French flair, a minibus waited, while the women walking past in black boots and jackets made Parisiennes seem shabby. We were waiting for security clearance to enter a different world, the Shatila refugee camp, as the second step of a most ambitious project.

Once clearance had come from the security council in Shatila - Lebanon’s police and army do not enter the camp - we drove through the drizzle along dual carriageways to the refugee camp, only three or four miles away, so not far from the middle of Beirut. The cricket world drives on the left; driving on the right was a mark of how we were going against the grain.

The moment we turned into Shatila, the Beirut of luxury clothing shops and Porsches and the new national football stadium - which echoes a majestic Roman amphitheatre - ceased. Wooden carts displaying oranges and vegetables from the Bekaa valley; males of all ages waiting, and waiting; nothing so wide as a street but crowded alleys, and relatively clean, given the taps seldom have water (and then too salty to drink). Above all, wires: walk down any alley in Shatila and at least 50 wires and electric cables hang over your head. Annually about 30 people are fatally electrocuted.

We have two assets though: one is an artificial football pitch, which makes for an excellent ground on which Syrian refugee children can play cricket. The second is the beaming visage of Ratan (or Mohammad Shahidul Alam to give his full name that is never used). Having represented his native Bangladesh as a keeper/bat before Test status, Ratan has coached cricket everywhere from Chingford to China, including Bangladesh Under-19s and Malaysia Under-19s, before becoming the chief executive of Capital Kids Cricket, the charity set up in London in 1989 to prevent cricket dying out in state schools whose playing fields had been sold.

At times, in the rain, this project seems hopeless, doomed: before last October, when Ratan made his first visit, nobody in Shatila had seen a bat or a cricket ball. In the morning he teaches adults to be cricket coaches: male and female, they are a mix of Lebanese, Palestinian and Syrian (why they are separate nationalities, when they have Arabic and so much else in common, is a question to be directed to the administrators of Britain and France who carved up the Ottoman Empire).

How on earth can these Syrian adults be expected to learn the infinite complexities of the LBW law, or even bowl with a straight arm, after what they have been experiencing? When one is interviewed by the BBC - once a biology teacher in Homs and a lab technician in the fine German-funded hospital that was - he breaks down twice when recalling his kidnapped brother and friends lost.

Then in early afternoon the gate of this football ground is unlocked and kids charge in, bringing with them crisp spring sunshine. They are all Syrian: since the civil war began in 2011, with western encouragement, half a million Syrians have been killed, and two million have fled into Lebanon, with its population of four million. Palestinians expelled from Israel in 1948 started the Shatila camp, which has seen more than one massacre in its time, but some have moved away - or built even more floors on top of their already unsafe apartment blocks - to rent out to Syrians.

These kids, boys and girls, are the fortunate ones: they are some of the 700 who attend a school in Shatila that is run by a charity, Basmeh and Zeitooneh (Smile and Olive), with 3,000 children on their waiting list.

Such is the excitement and enthusiasm, the charging round and volubility, that the afternoon call to prayer appears to pass unheard. Soon this artificial football ground, amidst the alleys and wires, could be a village green in England on a club training evening. And this is the point of cricket: when a ball whizzes at you, everything else ceases for that moment to matter.

So much chaff - some will never get the hang of it - yet wheat too. A boy middles a pull-shot as meatily as any tennis ball could be middled. A lithe 11 year-old girl in a scarf bowls the right line and length at good pace. The fielding is sometimes spectacularly good, especially the high percentage of throws hitting the stumps. “Throwing stones is what we do in Palestine,” a coach laughs.

Too many balls are either wides or no-balls bouncing more than once, and even good batsmen - let alone learners - find it hard to hit erratic bowling. This is where the junior bowling machine, donated by Bola, comes in: every ball is accurate when a child has a go. Suddenly a tiny girl, too young to wear a scarf, hits three highly presentable cover-drives in a row: it cannot be random possibility. How old are you? Eight, she replies.

The idea of giving these schoolkids the chance to play cricket was conceived by a distant relation of Hedley Verity, the great Yorkshire and England left-arm spinner. Richard Verity used to play for North Middlesex CC, when it was a club for Londoners of diverse backgrounds; he thought cricket could be the way to go in Shatila when he took a year out from the consultancy McKinsey and Co, who have funded this cricket project and others in the camp, to become the Deputy CEO of Basmeh and Zeitooneh.

For cricket to survive in Shatila, it has to grow in the rest of Lebanon - and it is not sufficient to quip that cricket is a Sidon game! But there are tens of thousands of capable cricketers in Lebanon: the Bangladeshis who work in construction and restaurants. This sport can grow rapidly if Commonwealth ambassadors talk the government into a regular ground, for staging a T20 league on Sundays, with a hard-ball first division and a semi-hard ball second division, for males and females, for expats, Lebanese, Palestinians and those Syrians who are understandably too afraid to go home without UN observers to monitor their return, only the Russian army.

“Hedley Verity’s last words to his men, after he was shot in Italy where he was a captain during the Second World War, were ‘keep on going.’ I will try to follow his example,” said Richard Verity. And why not? If you were in another refugee camp 20 years ago, near Peshawar, watching Afghans wielding pieces of wood and stones, you would never have predicted that Afghanistan would beat West Indies in the final of the qualifying tournament for this year’s World Cup, and are now eighth in the world T20 rankings. Football is so much simpler, but girls in Shatila do not play it. Their only future is to become a teenaged bride - the average age 15 - when their family cannot afford to feed another mouth. Why cannot they be allowed to play cricket, and even aspire to play T20 for a living? Why not indeed? It is not as if any other peace plan for the Near or Middle East has worked.

The third step would be for a mixed Shatila team to compete in the CKC World Cricket Festival on July 8 at Hackney Marshes organised, of course, by Ratan. Over 1,000 London primary schoolchildren are due to play simultaneously, setting a world record, with the World Cup on display.

Beyond that, this cheap and highly accessible form into which cricket is evolving - plastic bats, balls and stumps - could become the sport of refugee camps: an escape for those who cannot escape them. The potential is almost limitless. According to the United Nations, the number of refugees worldwide is almost 70 million, and increasing.