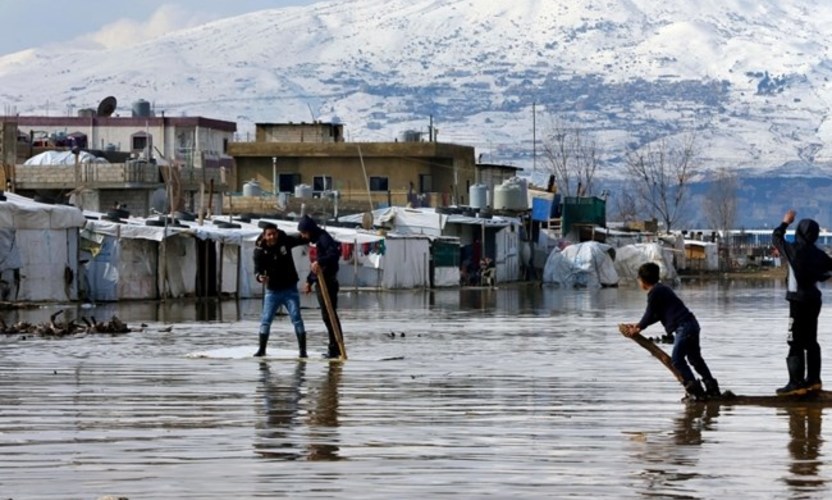 BEIRUT: The violence with which storm Norma hit Lebanon and devastated refugee communities has helped some smaller NGOs drive successful fundraising campaigns, raising hundreds of thousands of dollars for relief operations. However, those NGOs caution that the success of these recent campaigns belie the fact that every year providing emergency relief in Lebanon gets ever harder.

At the beginning of last week Smile and Olive Foundation U.K., the U.K.-based chapter of Lebanese NGO Basmeh & Zeitouneh, started a campaign on international online fundraising platform JustGiving to raise relief funds for refugees suffering from the dramatic effects of storm Norma.

The organization initially aimed to raise 20,000 pounds ($25,700), and by Tuesday had accommodated 200 refugees, and provided hot meals for each of them, and 270 blankets. That goal was easily reached, Smile and Olive co-founder and chief communications officer Yasmin Kayali estimated, within three to four days, and a new target of 30,000 pounds was set.

“The campaign specifically has gone very well,” Kayali told The Daily Star. “This was our experience when the Syrian crisis first started - you used to be able to fundraise like this.”

She puts the campaign’s success down to a number of factors.

This was the first time the Smile and Olive group had based their fundraising in the U.K., opening up a new pool of potential donors and offsetting some of the donor fatigue that has increasingly affected NGOs working on the Syrian crisis.

Equally, the dramatic effects of the storm helped garner good media coverage. “Even Beirut was affected,” Kayali noted, suggesting this might have driven awareness of what was taking place in the more severely affected parts of the country such as the Bekaa valley.

The Syrian crisis is now in its eighth year, and every year refugees have to face the brunt of the winter weather. While some have begun to return to Syria, the U.N. refugee agency still has nearly 350,000 registered as living in the Bekaa, alongside thousands more unregistered.

A reliance on emergency funding, reacting rather than anticipating major crises, is not the only reason small NGOs are unable to fully prepare for emergencies, said Rouba Mhaissen, Founder & CEO of SAWA for Development and Aid.

“The camps are not permanent structures because of political decisions to make these camps unsustainable and unlivable. This is why every year we are facing the same problems,” she said. The poor infrastructure has negated some of the organization’s previous emergency response, with many donated blankets and mattresses now underneath Norma’s flood waters.

Once they persuade donors to support their cause, Lebanese NGOs face further problems gathering funds. One of the main reasons Smile and Olive chose to base their fundraising in the U.K. was to access the simplicity of the JustGiving fundraising platform.

Mhaissen said that SAWA had used JustGiving as a Lebanon-based NGO in the past but that they could not access the platform now “because of counterterror legislation.” A JustGiving spokesperson told The Daily Star via email, "JustGiving took a business decision in the last year to discontinue services in regions where we do not currently have a physical presence as a company. This has been done to comply with costly legal restrictions and to ensure we can offer the best service to our charity and non-profit customers."

NGOs have to comply with increasingly stringent counterterror and security legislation, which can impact their operations. “Because of the counterterror legislation we have been having a lot of problems receiving funds,” Mhaissen said. “[There is] a lot of bureaucracy, and even with that the money takes weeks and weeks to reach the bank account.”

SAWA now uses another website, Ihjoz, for its fundraising, but the platform is not as streamlined as others like JustGiving, which Mhaissen suggested could have impacted donations. “If it’s more than one click people feel that it’s a hassle.

“They have to click many things and they have to register on the website,” she said. “More people could have donated if it was simpler.”

Despite the increasing difficulties smaller NGOs face, Kayali maintained that they have a vital role to play in providing emergency response operations. “We’re quick to respond right away,” she said, adding that smaller NGOs still have to deal with less bureaucracy than bigger organizations. “As soon as you have any kind of cash you can use it, and we already have boots on the ground. We have close relations with the community, which helps us make more of an effect.”

Kayali pointed out global organizations can power bigger fundraisers. “When they make a call out they reach everybody, while we reach our inner circle. But for direct and emergency response we’re a lot quicker on our feet than they are.”