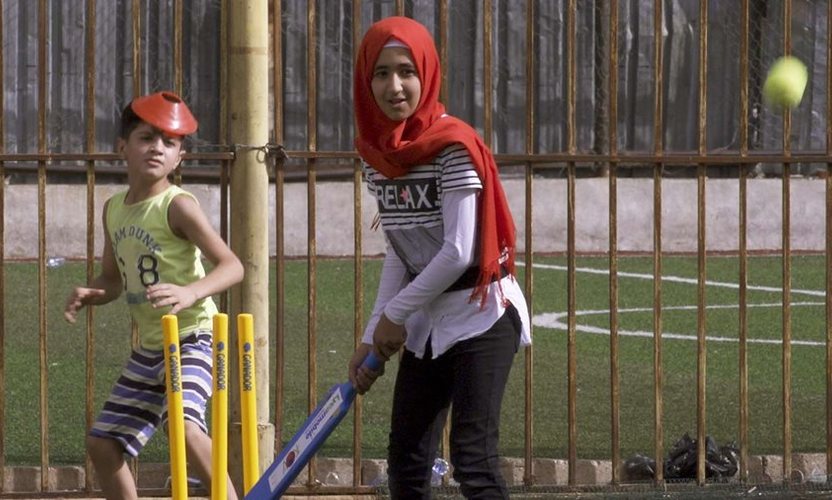 This past October, the vast Shatila refugee camp in southern Beirut echoed with an unusual sound: the crack of bat on ball. More than 40 Syrian children—most of whom had never heard of, let alone played, the game—were participating in a cricket camp. News travels fast in Shatila. The following day, 120 kids showed up, a quarter of them girls, navigating the narrow streets lined with spider webs of electric wires to reach the modest playground.

The week-long camp, organized by the charity Capital Kids Cricket with help from a McKinsey team, was an early highlight for Richard Verity in his new job guiding Basmeh & Zeitooneh. Becoming the leader of a Lebanese relief organization for refugees is a significant departure for Verity, a partner based in the London office who specializes in advising oil and chemicals companies. But here he was, on a year-long leave of absence, cheering on young cricketers as he plotted how to help an NGO run largely by refugees themselves become more effective.

Verity’s journey to Shatila began five years ago when a young colleague burst into his office full of urgent enthusiasm. “We have to do something around Syrian refugees,” he said. “He thought I might be a soft touch,” notes Verity, who had assisted on other firm-organized social initiatives. When Verity did some research, he realized the situation was more severe than most people realized. There are more than two million Syrian refugees in Lebanon, according to some local estimates, and while a variety of organizations already tend to their basic needs, there is an important gap: education.

About 750,000 children of school age have been displaced into Lebanon by the Syrian crisis, most receiving no schooling for years. When Verity travelled to Shatila, he met Fadi Hallisso, a Syrian who had founded Basmeh & Zeitooneh (it means “smile and olive” in Arabic) in 2012 while studying to become a priest. The organization created community centers inside refugee camps where donors could provide programs ranging from microfinancing to vocational training to women’s workshops. In 2015, it opened the first school.

Verity realized this was where McKinsey could help. Not only do some consultants have a background in education, but the firm for years has been assisting governments and aid groups in delivering education and training to people displaced by global conflicts. “This issue is very personal to a lot of us at the firm,” says Tarek Mansour, a senior partner in the Dubai office who is partly of Lebanese and Syrian descent. But aside from the humanitarian aspect, the refugee crisis has critical socioeconomic implications. “We need to change the conditions to ensure each individual gets the chance to succeed in life,” says Mansour.

Verity was quickly convinced that Basmeh & Zeitooneh was the firm’s ideal partner. “Anyone who comes into contact with that organization returns changed,” he says. “They adopted us, in a way, as we adopted them.” Mansour and Verity partnered on a joint effort by McKinsey’s Dubai and London offices to support the organization. Over the past 4 years, firm-members have donated around $100,000 and the firm has given many times this in the form of pro bono contributions, including teacher training, curriculum development, and strategies for the organization’s initiatives.

Verity joined Basmeh & Zeitooneh’s board and brought in new international partners. And when Hallisso decided to take a year-long sabbatical to pursue a master’s degree in the United Kingdom, Verity saw the opportunity to become even more involved. “I had always wanted to help manage an organization and to make a more direct social impact,” he says. “Basmeh & Zeitooneh is no longer just a group of volunteers working out of a church basement but an organization of some size and importance.”

Since arriving in Beirut in October with his wife, Meike, Verity has been developing plans for turning the organization’s schools—there will be three by the end of February—into academic institutions with high standards. He is introducing new operating practices around finance, HR, and communications while helping the organization fine-tune its mission and raise funds. He’s also spending 6 hours a week studying Arabic so he can communicate with the local school’s young charges.

The cricket camp—which may become a permanent Shatila cricket squad—has been just one of many poignant moments Verity already has experienced. A few months ago, at another refugee center, he watched hundreds of children coming out of their tents to attend school for the first time. Many were functionally illiterate when they began. “Two months later, they could read and write,” he says.

But those on the ground are well aware they’ve only started to address the need. Helena Eccles, a consultant in McKinsey’s London office who helped organize the cricket camp, recalls a 13-year-old girl handing her a note, which she had written with the help of Google Translate, that said, “I want to enter school but they do not accept me, I am very sad.” There’s space for 750 children at the Shatila school, and a waiting list of 3,000.

For his part, Hallisso is gratified to see the organization he founded grow. “We are living amidst one of the biggest refugee movements, and it’s only growing,” he says. “We cannot leave these people permanently on the margins of society and of history.”